Last night I ventured out to one of my most visited streets in LA, 3rd. Some of my previous blogs have mentioned restaurants in this area such as Joan’s, Sweetgreen and now Son of a gun! I don’t recall how I came upon Son of a Gun, however, after searching for them on Yelp! I knew I had to eat there. I called the restaurant an hour before I wanted to eat and they had a few reservations open at the time I wanted to eat, so I was elated!

When I got to Son of a Gun I was able to valet park outside for $5 which was very convenient. Typically when I eat on 3rd I can never find street parking. Once I got inside I noticed the nautical interior which was very warm and inviting. I was quickly sat at my table and became immersed within the menu. I love seafood and Son of a Gun is definitely a seafood restaurant! The plates are pretty small, similar to tapas, which also made me excited because that means that I was able to try an array of dishes. For dinner, my roommate and I ordered two Lobster Rolls, Shrimp Toast, Yellowtail Poke, Brussel’s Sprouts, and Chips and Dip. First came the Poke and Chips, they were both delicious and unique. The poke was sweet and tart, a very refreshing way to start my meal, and the Chips were absolutely greasy and perfect. We could tell that the chips were homemade and was perfectly paired with a pimento cheese dip. Next came the best part of our meal, Lobster Rolls and Shrimp Toast! The Lobster Rolls came in bite sized perfection, absolutely delectable. The Lobster was creamy and cold and the brioche bun was flaky, buttery, and crunchy! I split my roll in half so that I could enjoy this bite in two pieces because I knew that it would be amazing. We then split the Shrimp Toast. The toast was so unexpected and so savory, crunchy, and sweet. I will be sure to order both the Lobster Toast and Shrimp Toast every time I go! We also had the Brussel’s Sprouts, which were good but not the best. I think they were a little confusing because they had an egg but also had a tad bit of cinnamon. I think they could be improved with a pinch of salt and more balsamic! 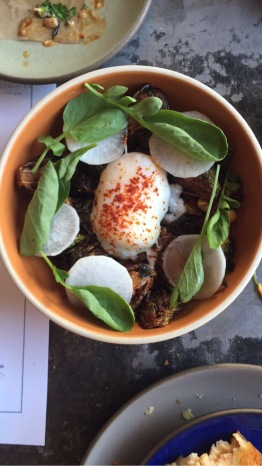 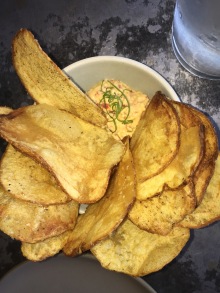 View all posts by Hanna